Trivandi have been part of the RFU team since March 2018 to oversee the operational readiness for the new East Stand. Chris Conneally has been leading for Trivandi on the development and integration of the RFU functional area operating plans, designing and running readiness exercises and coordinating a programme of test events prior to the official opening.

The East Stand extension is the first significant redevelopment of Twickenham Stadium since the South Stand was completed in 2008. It provides 11,000sqm of on-site facilities for 6,800 guests across seven unique world-class venues. The development now brings all official hospitality and debenture lounge access within the stadium and significantly enhances the match-day experience.

Trivandi’s Executive Director, Paul May said “the East Stand raises the bar in stadium hospitality; it has been a real pleasure to work with the RFU team, helping them to get it operational”

RFU’s Venue Director, Mark Lynch said “we brought Trivandi into the RFU team because of their combined experience of venue construction and operations. They have done an outstanding job of leading our team through the different stages of operational planning, readiness and testing”. 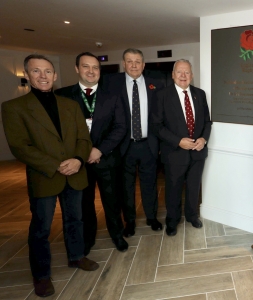